In a surprisingly large subset of my generation, 2016 was considered the worst year of this millennium at that point. Not surprising: plenty of idols for this generation died, some gorilla was shot and nobody won, and without getting too political in here, there was a plethora of political calamities. 2016 was such a lousy year, that almost no one even realized we have an effective vaccine against a disease with a 50% fatality rate now, the first purely solar powered airplane circumnavigated the earth, and the 50 year long civil war in the 29th largest country on this planet (by population) spontaneously ended.

In gaming however, 2016 was an excellent year: Doom(2016), Civilization VI, The Witness, Overwatch, Firewatch, Stardew Valley, Superhot, Typoman, Inside, Dark Souls III, Furi, Starbound, Redout, Pony Island, Rise of the Tomb Raider, XCOM 2, Enter the Gungeon, and R49t/R4qd589hwF1 — to name just a few that I’ve played (bold) or will play eventually. There was just a lot of stuff that I wanted to play through and very few of the games I played disappointed me. Also honorable mention to Pokémon S&M for best SEO in 2016, which surely sent all the kids to the right search results on google.

2017 however, while still considered a pretty lackluster year in non-gaming, is pretty much the lousiest year in gaming I can remember. Here’s a list of games from 2017 that I played through (bold) or am going to play eventually: Tooth and Tail, Hob, Nier: Automata, Overgrowth, Thimbleweed Park, Resident Evil VII, The Evil Within 2, Kingsway. A pretty moderate list, and arguably not a single “triple-A” title on there. But maybe it’s just my specific taste and there were a lot of games in 2017 that were great or excellent, but just didn’t appeal to me. What does steam think? 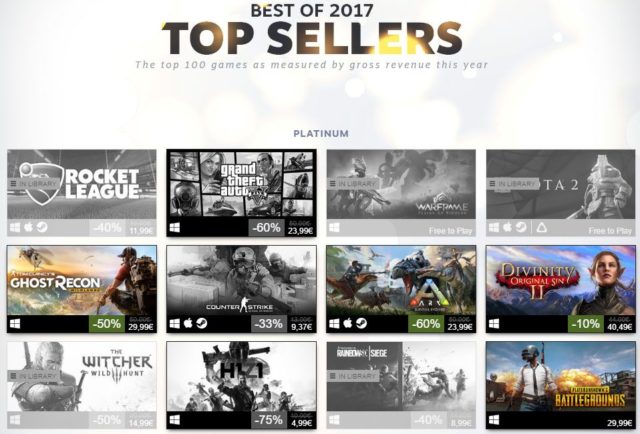 Eight of the twelve games that made the most money weren’t released in 2017. Out of the remaining four, one has been in early access for several years prior to release and one outright lies about not being in early access anymore in order to be able to get GOTY-awards. And no, it doesn’t really get significantly better further down. That’s what I thought, but “gold” is 5/12, “silver” is 7/12 and “bronze” is 13/56(!) released in 2017. And yes, we can argue about numbers and methodology here because the revenue of the first set of games is dominated by microtransactions and some of those games released very late 2016 et cetera, but the point is that 2017 didn’t have a lot of great games coming out on PC in comparison to 2016.

So I think it was a pretty lousy year. If you asked me what my favorite game of 2017 was, I’d have to say ‘Hob’. Even though that one has its faults, it was still an experience that I’d pay the low asking price of 20 bucks for anytime, and I strongly recommend playing it to anyone who likes video games, solely because of the things it does right. It also has some mild similarities to the best game that I played in 2017…

The best game I played in 2017 was technically released in 2016. On the day after Christmas. Boxing day. The 26th of December. At around 2:00AM. On Steam. Without telling Steam it was released. That game is R49t/R4qd589hwF1.

It’s obviously not called R49t/R4qd589hwF1. Before I tell you what it is called, I’m gonna give you another recommendation of a totally different game that was released on December 13th, 2016.

Alright, with that out of the way, I’m gonna review R49t/R4qd589hwF1. I’m going to heavily reference Glittermitten Grove in that review, to the point where — depending on your past experiences — it has a chance to spoil that game for you forever. Did I mention you should play Glittermitten Grove?